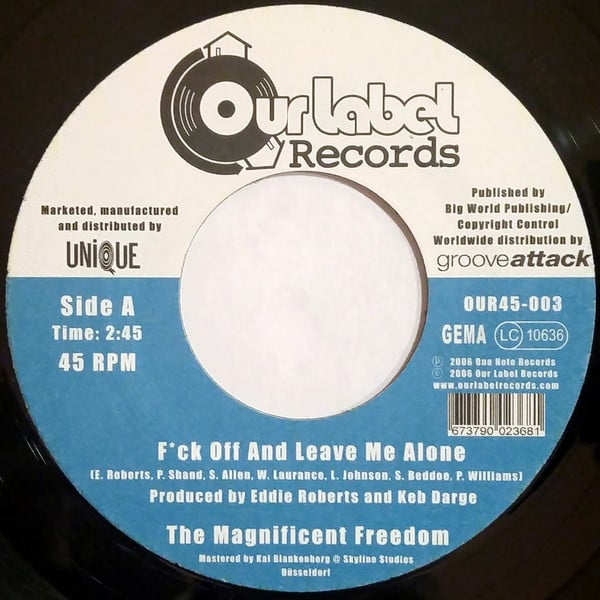 What a Deep Funk Monster produced by Keb Darge and Eddie Roberts and featuring members of The New Mastersounds.

Only recently, this dirty horn, angry and extremely funky groove monster was featured in “10 incredible leftfield Funk 45s (that no one is looking for)” compiled by Markey Funk for The Vinyl Factory. (…btw, I love, how the title of their article is compliant with the tradition of adding info in brackets behind the main title…).

A few good questions were raised about the release and while we immensely enjoy the mystery surrounding the release, let us give you some more background info here.

This song is called “F*ck Off And Leave Me Alone” by The Magnificent Freedom
It was released as the third single on Our Label Records in 2006.
1200 copies were pressed due to the success of the first two single on the label
(OUR45-001 The New Mastersounds “Give Me A Minute” sold 1000 copies within a few months in 2005, OUR45-002 The Inmates “Bread & Water” sold out in a bit more than half a year in 2006).

Unfortunately, this tune didn’t sell quite as fast as expected, with about 350 copies sold in the first six months. The Funk Scene was changing in those years and new releases were flooding the 7″ market, with quite a few of the good ones being overlooked by a majority. But this particular 45 seems to have been picked up by collectors and DJs steadily over the years..

The tune was recorded in the same session(s) as “Bread & Water”, with members of The New Mastersounds and The Haggis Horns, produced by Keb Darge and Eddie Roberts. Keb initiated the session to produce recordings for the Kay Dee label, he was administrating alongside Kenny Dope back then (it seems, that Keb is not involved with label anymore).
While Keb was going for an updated version of the Willie J. & Co. classic “Boogie With Your Baby” with what would later be called “Bread & Water”, “F*ck Off And Leave Me Alone” was aimed at the Deep Funk crowd, with its wild tempo, breaks and the crazy horn arrangements. The title came from one of the band members being very VERY annoyed with his ex-wife at that particular time.

There is different stories to why these tunes never made it onto Kay-Dee, depending on who you ask.
However, Eddie Roberts and Simon Allen approached Our Label Records, before the masters would collect dust, and we were very happy to release this fine music.