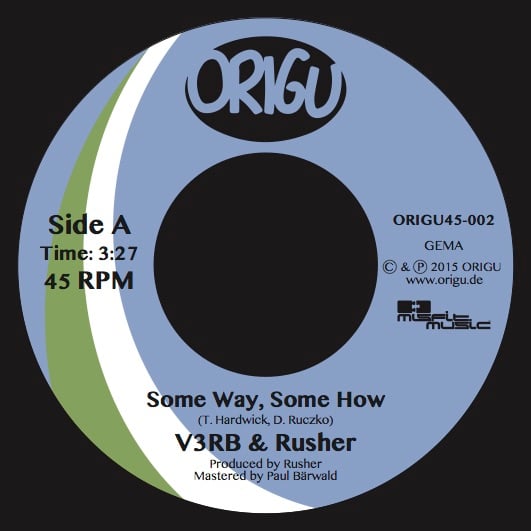 All tracks produced by Rusher. Cuts on "March On" by DJ S.R. Listen

If you buy multiple items with different release-dates, all items will be shipped together on the date of the latest release in your order.

After the successful start with the release of “Follow The Master” by Substantial, Origu teams up with Misfit Music for a 7” by the trio of Kayohes, V3RB and Rusher, two MCs from the US and a producer
and filmmaker from Germany. “Some Way, Some How” gives you powerful raps from V3RB over a deep rhodes-filled instrumental, as “March On” enters your ears with a mellow horn-sample and a stomping drumbreak. Both MCs shine with lyrical skills and clever wordplay, and DJ S.R. delivers some on point cuts.
File alongside your Lord Finesse and Black Moon records.

About V3RB, Kayohes & Rusher:
In the late 2000s German producer and filmmaker Rusher and MC and producer Kayohes from Albuquerque, USA, met over Myspace and shortly thereafter united with V3RB to start working on musical projects. Ironically, V3RB, originally from California, and Kayohes met in Germany, while V3RB was on Army duties and Kayohes lived there for a few years. They have maintained their skill trades eversince. With Rusher in the mix, and travelling back and forth between his homecountry and the States for his film projects, it was easy for the three to keep up their artistic operations, recording tracks and making videos.