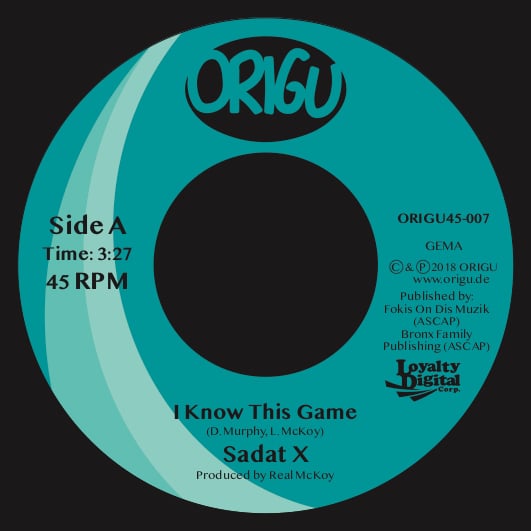 *if you order multiple items, everything gets shipped on the relase date of the pre-order item.

ORIGU teams up with Loyalty Digital Corp. for a true banger by the legendary Sadat X of Brand Nubian.

"I Know This Game" off Sadat's album "Never Left" is finaly out on vinyl.
Produced by Local-Mu12 Member Real McKoy, this record is gritty and hits hard. The scratches provided by DJ Grouch fit the song perfectly, Point blank; Sadat X goes in on this one like the true veteran he is. One of a very select few to record with both Biggie & Jay-Z it is safe to say when you see the title "I Know This Game" you better believe him.

On "Joe Frazier" Sadat X & The UMC's team up for a golden era inspired track called "Joe Frazier" that knocks just as much as the late Boxing legends left hook
The UMC's is composed of Haas G and Kool Kim, who released the critically acclaimed, full-length album Fruits of Nature in 1991, which garnered chart success with the duo's #1 Billboard Hot Rap Single "Blue Cheese" and #2 Hot Rap Single "One To Grow On." In 1994, the duo released its sophomore album, Unleashed but split up soon after.
This is their first appareance on vinyl since 1994 and the track was also producced by Haas G aka Fantom Of The Beat.